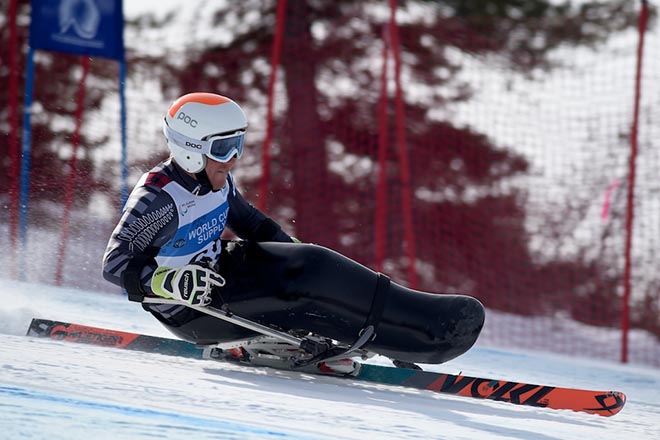 The Super-Combined requires ski racers to demonstrate two different skill sets starting with the speed discipline of Super-G in the morning and continuing with the technical discipline of Slalom in the afternoon. Only competitors who successfully complete the Super-G run can start the Slalom.

Adam Hall is a Slalom specialist and claimed a Paralympic gold medal in this discipline in 2010 while sit skier Corey Peters has demonstrated his strength in the speed disciplines, claiming two World Championship titles earlier in the week in the Downhill and Super-G.

Adam would be looking to get back on track today after a nasty fall on the downhill course earlier in the week left him with minor concussion and meant he had to sit out the Super-G on Friday.

Second racer to start in the men’s standing Super-G this morning, he took a solid, if slightly tentative run down the course to secure 10th position and a start in the Slalom.

Not ranked as a top seed in Super-Combined, Corey Peters was one of the last racers to start in the men’s sitting category. Holding good speed and diving into his turns his time was fast enough to put him in to second place ahead of the Slalom.

Following a two hour break and with the course set for technical racing, the action resumed. Adam Hall looked very much at home on course, snaking through the Slalom gates with smooth tight turns and posting the third fastest Slalom time in his category, to pull him up to a sixth place finish overall  in a time of 1:58.95.

“After the big crash and the disappointment of missing a day’s competition it was good to be back on the race hill today,” he said. “I did play things a little on the safe side and was probably a little too tentative on the Super-G which pinched me on the overall result but I was really pleased with my Slalom run which was third fastest.

“I had high hopes coming into World Champs and the crash has moved things a little bit off track but everyone has their setbacks, it’s part of ski racing and I’m lucky to have come away with no major soreness.

“I still feel that I’m sitting in a good spot technically and I’m going to come back fighting for the Giant Slalom and Slalom.”

In the final category of the day, men’s sitting, NZ’s Corey Peters was pleased to put together a respectable run but would have to relinquish the podium to Slalom specialists Germany’s Georg Kreiter (1:56.84), Austria’s Roman Rabl (1:57.70) and France’s Frederic Francois (1:59.39). The Kiwi finished in fifth place with a time of 2:00.18.

“I always knew that Slalom was my weak link,” he said. “The Super-G went really well but I need a bit more of a buffer coming into the Slalom.”

Like his team mate, Peters will also now look forward to the Giant Slalom, the discipline in which he won a Paralympic silver medal last year.

“It’s going to be awesome!” he predicts.

Racing continues in Panorama tomorrow (Monday NZT) with the Giant Slalom and will conclude on Wednesday (NZT) with the Slalom. A livestream will be available at www.Panorama2015.com

Another reason some people prefer Sildenafil, compared to Levitra or Kamagra 100 rezeptfrei