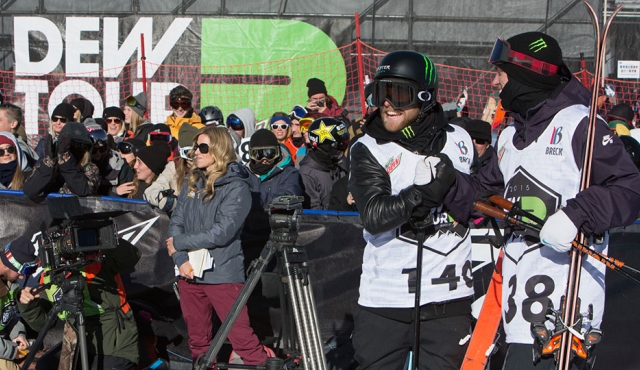 Team Kiwi have started off the 2015/16 northern hemisphere competition season with a show of force at the Breckenridge Dew Tour. The unprecedented number of top 5 finishes, including back to back podiums by the Wells boys, is a huge boost of confidence to our elite park and pipe athletes.  With the Dew Tour reduced to just a single stop in the last few years, the invite only December season-opener has become one of the ‘big-deal competitions’ on the yearly calendar, serving as an important measure for athletes to see how they stack up against the competition just one month out from X Games.

First athlete off the ranks was Janina Kuzma, who just narrowly missed out on a podium spot in the women’s Halfpipe Finals finishing in 4th place. Nailing her first run with a score of 80.40, Janina went for the step-up in the second run but couldn’t quite put the second hit 720 to her feet and had to settle for her first run score. Janina remained philosophical with the result.

“I’m really happy, it’s good to brush off the cobwebs and get the first competition underway… I was stoked that my first run went well, I got the grabs in and the amplitude I wanted. I decided to go with the step up run for the second run, it makes it more exciting to mix things up. I was disappointed not to land it but still, it’s a good start to the season.” – Source SnowSports NZ

In the mens Halfpipe competition, both Beau-James Wells and Byron Wells managed to battle through a heavy field of competitors to qualify for the 12 man final. Under lights and heavy snowfall Beau-James, who has been showing a new level of comfort in the pipe this year, led the field after the first run with a silky smooth switch left 7 tail to right dub 12, left 9, right 9 and left dub 12 safety to finish.

Byron has been coming back from an ankle injury sustained in April and spent the NZ season off snow. After crashing his first run he recovered to stomp the second, earning a 84.40 and 3rd place, until he was eventually bumped to 4th by Alex Ferreira. Byron finished the comp in a highly respectable 5th place, and looks stoked to be back on skis.

Beau-James’ style saw him cling onto the number one spot as other heavy hitters either crashed or fell short, and he decided to up his game for the second run through the pipe. Adding a right dub 9 to the 2 other dubs – the first time that Beau has landed the 3 dub combo in competition – The Beau Lion was able to improve his score and extend his lead. He nervously held on the top position until the very last run of the night, when Olympic gold medallist David Wise narrowly pushed Beau into second. A silver medal at a Platinum event like Dew Tour is a career-best result for the young Wells, and a sign of big things to come.

“It’s my first Dew Tour podium and this is the best feeling ever,” said an understandably stoked Beau-James after the finals. – SnowSports NZ

Last but by no means least, was the big man Jossi Wells. Now retired from halfpipe to focus on slopestyle, Jossi had qualified through to the Mens Slopestyle finals in 2nd place and had all eyes on him. Having been likened to Zoolander for making skiing look really really ridiculously good-looking, The Boss played the comp like the cool competitor that he is. Strategically opening with the exact run he qualified with, he knew he had a score on the board and more in the bag for the second run.

“My goal was to look as good as possible and after the first run, placed in 6th, I knew I had to put down the switch 14, a trick I had only ever completed in a big air comp, not slopestyle. I had been working hard on this in training and at the Cardrona Spring Camp in October. I put down all 4 doubles and aimed to tackle the last jump when I got to it and with such a heavy finals, I knew it had to look really good”.

He did. Jossi stomped the switch dub 14 and skied away with a 90, which was just short of Gus Kenworthy’s 92.20 and good enough for another silver medal in the Wells trophy cabinet.

“This was the heaviest final I have ever competed in. The level of skiing was amazing with all the competitors putting down podium level runs. I am so stoked with the result and I feel set up for the rest of the season and my next comp in a months time.”

Coach/Dad/Wolf Pack Leader Bruce Wells couldn’t have been prouder with the boys performances. “The caliber of the field would have made this particularly difficult for the judges. The run Jossi put down we had planned in training and we knew being able to link together the variety of tricks in his toolbox would be key. We are frothing, it has been an amazing weekend.” – SnowSports NZ