A recap on this year’s FWT

It has been a tumultuous year for the Freeride World Tour, organisers have been knocked back at every event, having to use back up venues and weather days due to snowpack instability, lack of snow and poor visibility.  Success was enjoyed by Sam Smoothy in an adversarial season in which he dealt with appendicitis, surgical intervention and helicopter rides which were not recreational.  Kiwi supporters have sadly watched two of our top Freeriders Neil Williman and Charlie Lyons take tumbles in competition and lose their spots for the Verbier Finals and the FWT 2015. 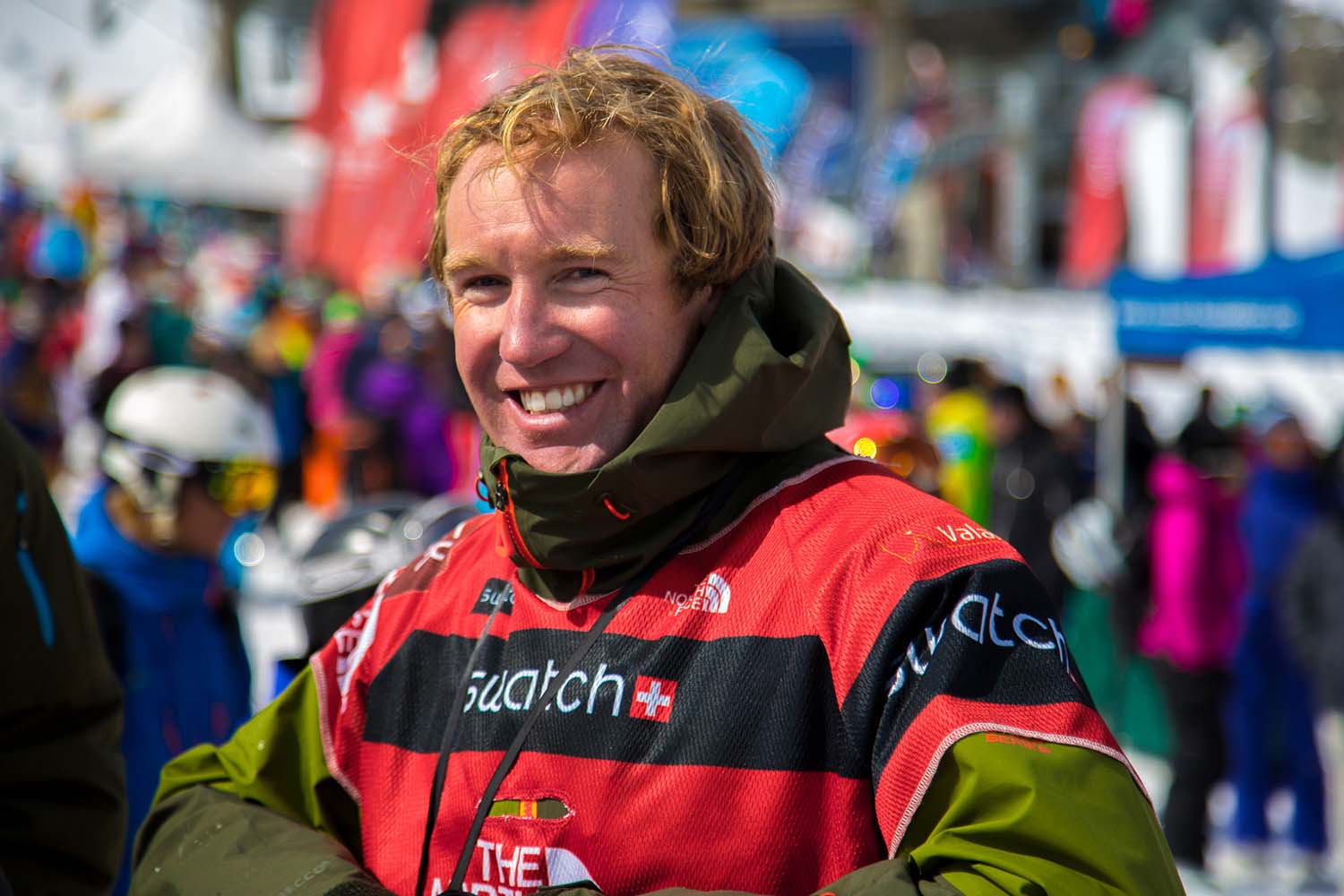 Sam Smoothy came through adversity to be a success story this year!

The New Zealanders were not alone in experiencing the bitter side of the Freeride World Tour with organisers deciding to make bigger cuts to the field for the following season.  Half of the skiers who qualified for the Verbier finals in 2013 did not even requalify for the FWT 2015.

I caught up with Drew Tabke, FWT Champion 2013 who had some insightful comments on the nature of Freeride and how easy it is to fall from the top.  After winning in 2013, Tabke struggled to replicate his previous success in 2014.  Tabkes focus had shifted from looking for the most inspiring and creative way to ski the venue to looking for the winning line.  Musing on his performance this season, Drew concluded that searching for the win does not work for him in Freeride.

“You cannot expect to be consistent in a sport with so many variables out of the athletes control.” Lamented Tabke, “Your mental state translates into your skiing – Sam Smoothy this year was super relaxed.  While a lot of people were stressed about trying to win or worried about sponsors etc, Smoothy was just super relaxed and his skiing looked amazing with good flow because you could tell he wasn’t trying to force it.” 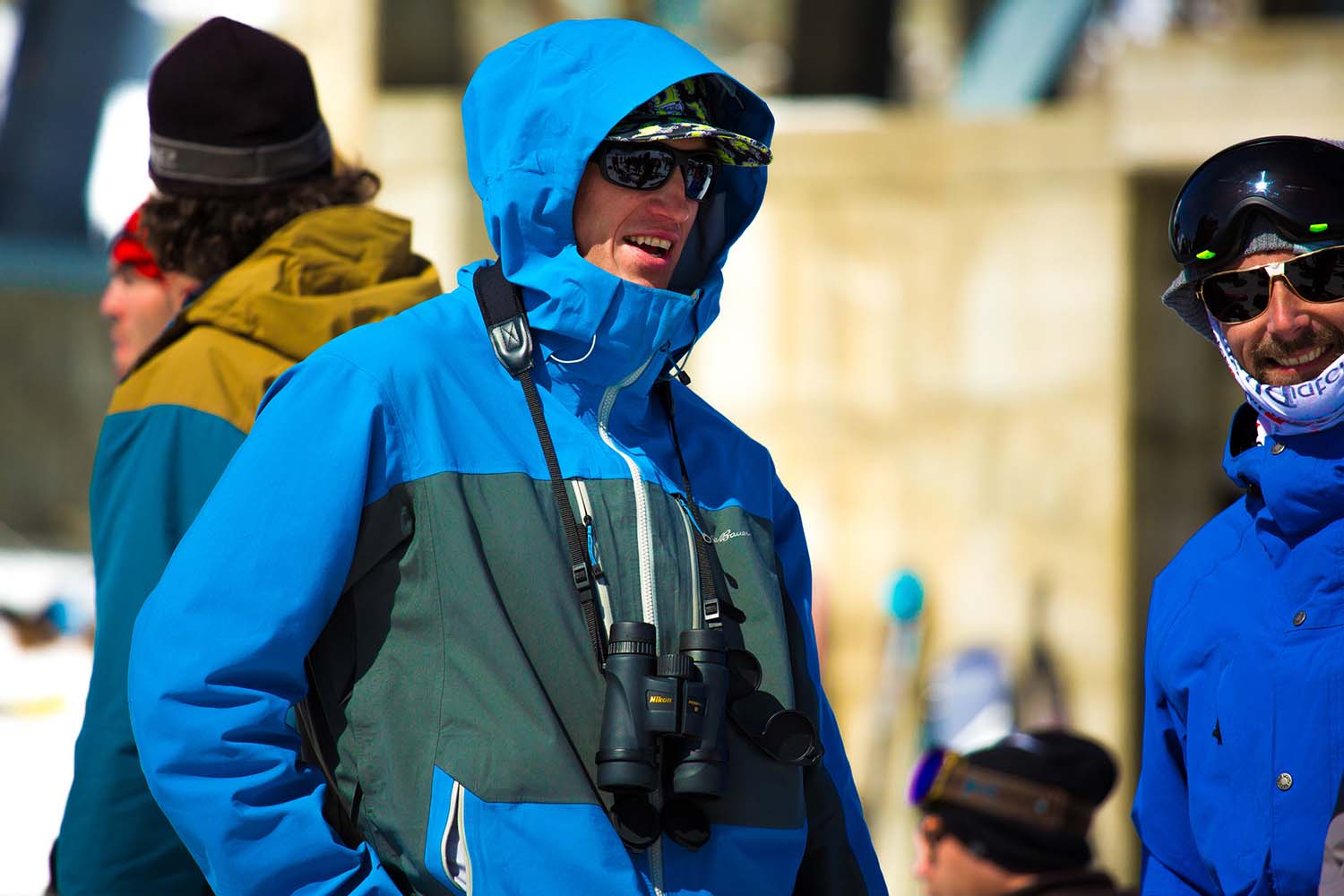 Drew Tabke struggled to find his unbeatable form of 2013.

Speaking to Sam Smoothy about his solid results this season definitely echoed Tabkes sentiment.  “My main focus for FWT 2014 was to chill and enjoy my riding.  I felt the year before, being a new member of the paid skiing elite caused me to take it too seriously.  I beat myself up over every bad result.  This season I think a much more relaxed approach worked.” 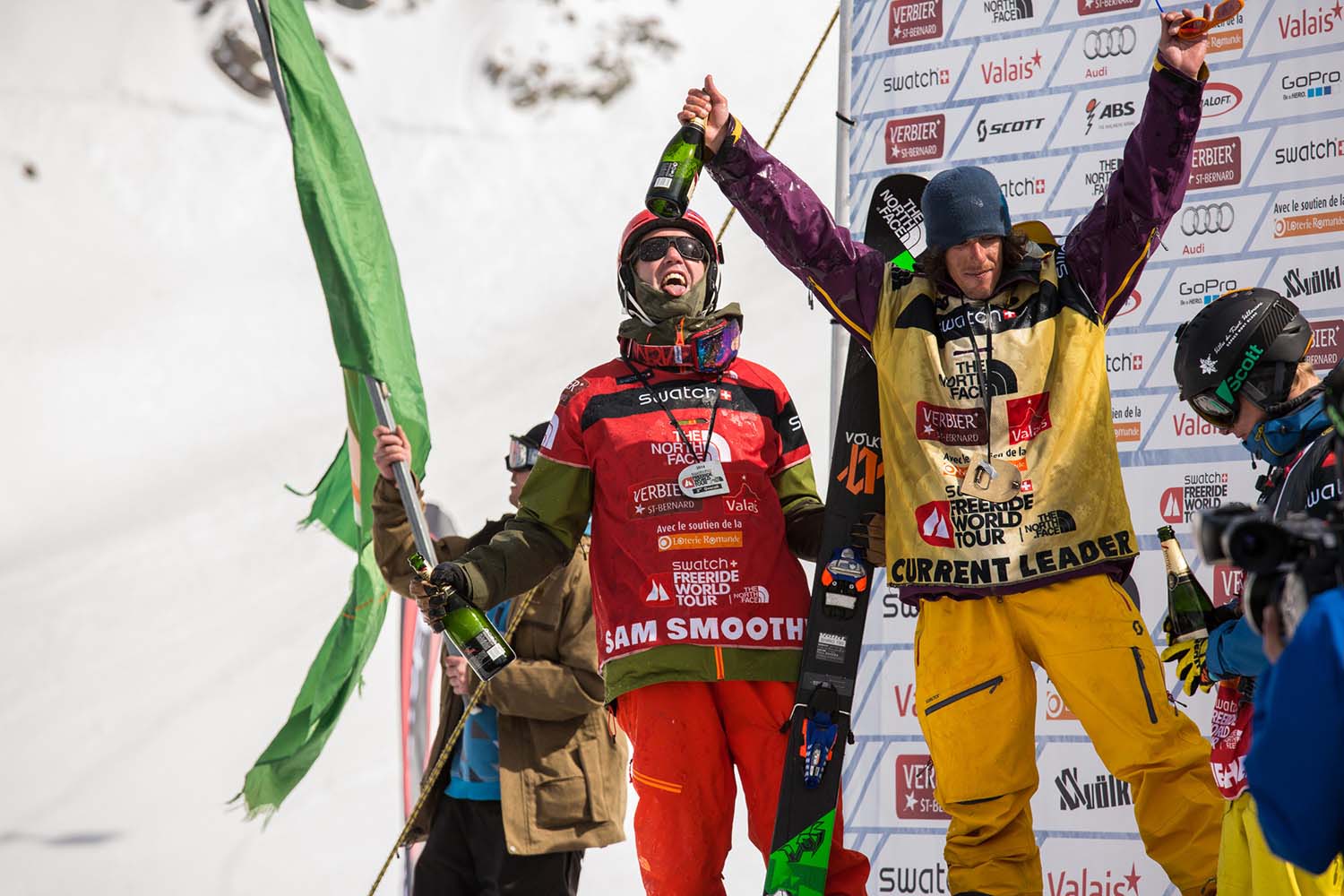 Neil Willimans’ goal for the FWT season was to qualify for the Verbier finals, he had a sound game plan to lock down some mid-pack results at the first two stops and then turn it up in the hope of some podium places later in the season.

Problems surfaced first in Kappl, Austria where Williman threw down a sick run, only to come unstuck while landing a bread and butter air well within his capabilities.  Replaying the footage, Neil thinks he hit a rock or piece of ice – a prime example of the constant battle athletes experience with the uncontrollable variables on every venue.

An aggressive air straight out of the gates on the Snowbird stop of the tour saw Neil crash again.  These compounding results caused a loss of confidence and self – belief.  “Competing in freeride is an emotional rollercoaster.  It’s crazy how one result can make you feel like you’re awesome or that you suck after only one run.”  Sadly for Neil (and cantab Charlie Lyons), the Revelstoke stop of the tour was cancelled due to a huge avalanche making the Mac Daddy face unviable.  This meant for both of these strong skiers, the World Tour dream was over for 2015 as well.

The Final took place on March 29th, a full week after the intentioned competition date due to low tide on the famous Bec de Rosses venue.  This was a decision by organisers which paid off, snow fell steadily for a couple of days and was given an additional few days to stabilize before avalanche control.  Conditions were not ideal with wind affected and variable snow across both the Mens and Womens venues.  The snow level was not sufficient to allow skiers to access some areas to the lookers right of the Mens start point, which limited line choice. 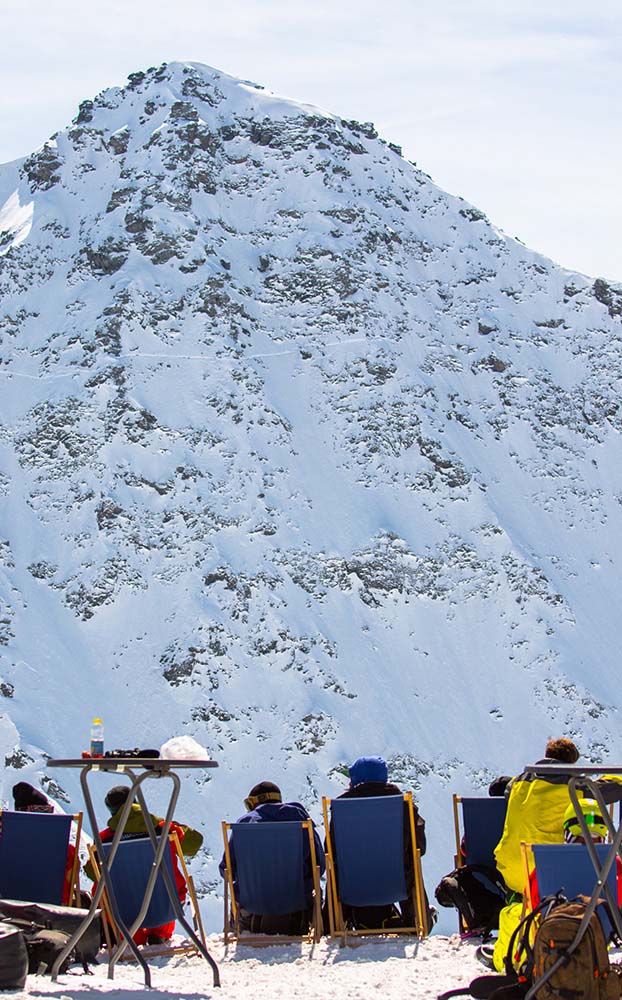 Two massive airs stood out from the pack in the FWT final to judge kiwi judge Dion Newport.  Both Norwegian Pia Nic Gunderson and American rookie Ian Borgeson broke new ground in terms of what is possible in Freeride.

Borgeson threw down the biggest 360 seen to date on the Bec de Rosses.  The feature was none other than the ‘Reine’ cliff named after former World Champion Reine Barkered.  This enormous trick was enough to get the young athlete 2nd place, next to Barkered whose text book clean style and speed earnt him the win. 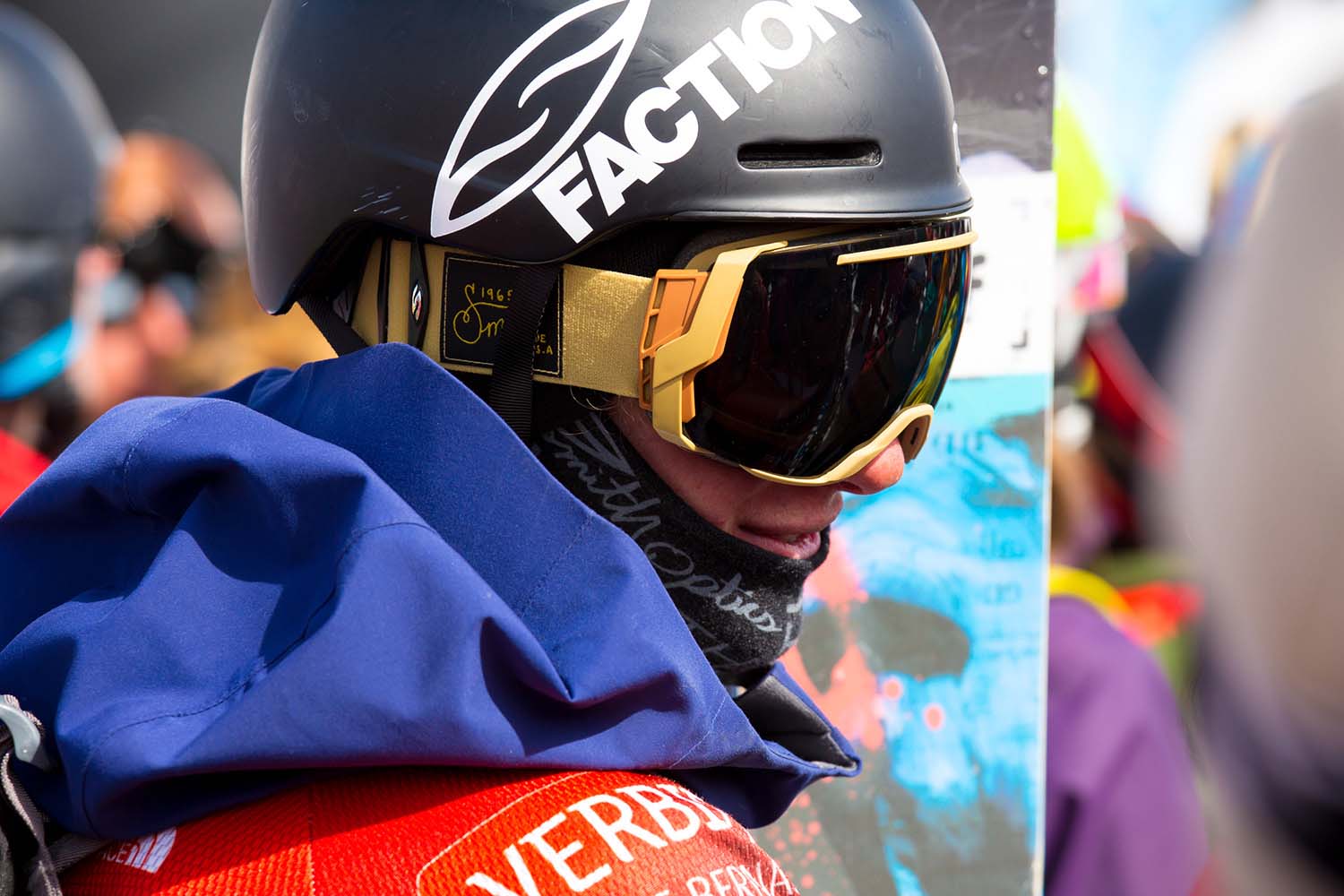 Pia Nic pushed the boundaries for ski women in the size category.  Her one and only air was taken at pace and is according to head judge Berti Ring the biggest air ever landed by Ski Women on the Bec de Rosses.  Rewarded for risks taken, Gunderson won the Verbier Xtreme, placing her third overall on the FWT 2014. 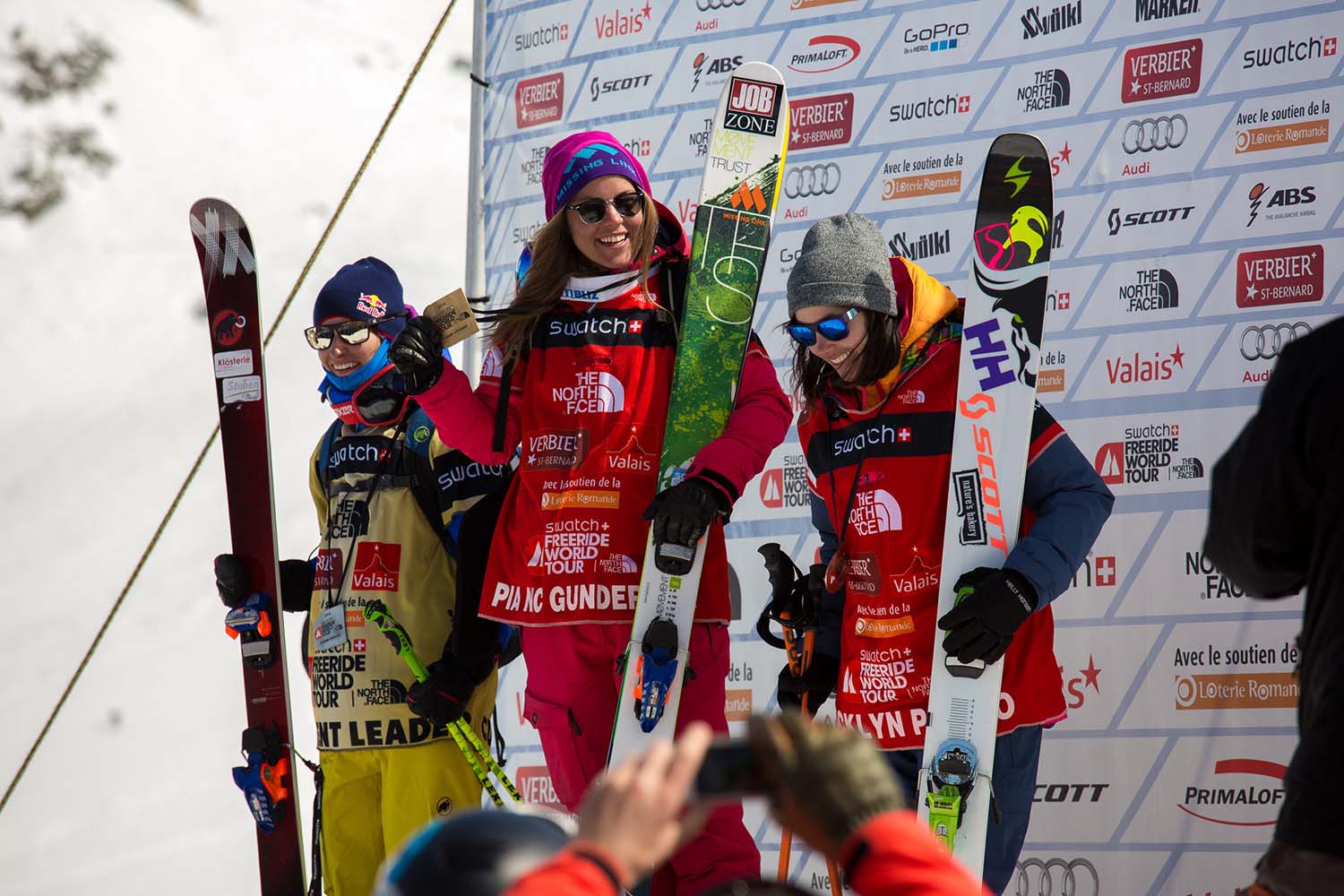 Gunderson has always been a strong contender who knows her own capabilities.  She was inspired by Hadley Hammers huge air on the Snowbird stop of the tour and decided to step it up for the finals.  To get in the right mental state for her competition run, Pia concentrated on her ability to drop the cliff, pushing aside the ‘What if’ aspect of landing it and navigating the pepperfield run out.  Happy to be pushing the frontier of womens freeriding, Gunderson said she hoped her run would inspire other women as Hammers run had inspired her.

World Champion of 2013 Nadine Wallner maintained her winning streak again this season.  In contention for the title with fellow Austrian Lorraine Huber, the pair had been neck and neck throughout the season.  Huber took two tumbles in her run, leaving the path open for Wallner to ski smart and secure the win. 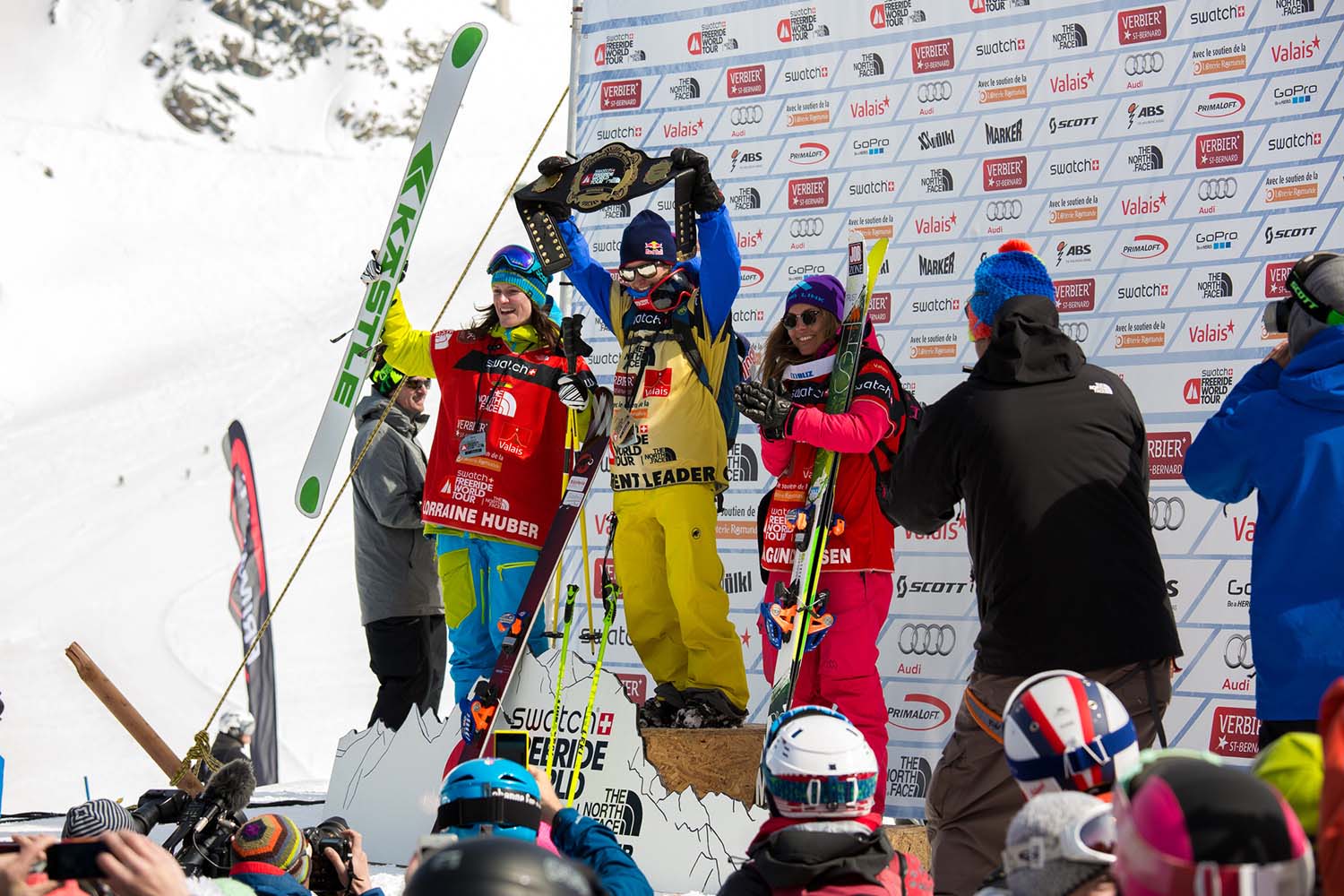 Despite a season riddled by injury and illness, Sam Smoothy has managed to complete the season with the illustrious Vice Champion 2014 title under his belt.  Slightly bemused by the phrasing of the 2nd position for the FWT, Sam was none the less elated to have landed a conservative run on Verbiers Bec de Rosses.  Just three days before the competition Smoothy had a high speed crash, impacting an exposed boulder directly onto his lower back and pelvis.  He was airlifted off the mountain with a suspected broken back which thankfully was not the case, however extensive muscle damage rendered him almost immobile.  As luck would have it, his physiotherapist mother was in town to watch him compete and intensively worked to get him functioning in time for the Finals.

Defying the odds, Sam was standing in the start gate of the Verbier Xtreme feeling mentally ready for it.  Dropping in and laying down a few turns he could feel his body was not stable and strong enough to withstand the winning run he had dreamed of.  Making a snap decision to ski more conservatively (if you could call a 60 ft air conservative), forgoing a strike at the World Title in the hope of landing his run and getting on the podium for the overall results of the season.

This calculation paid off and Sam secured a podium position in 2nd place behind the new FWT Champion Loic Collomb-Patton who placed third on the day. 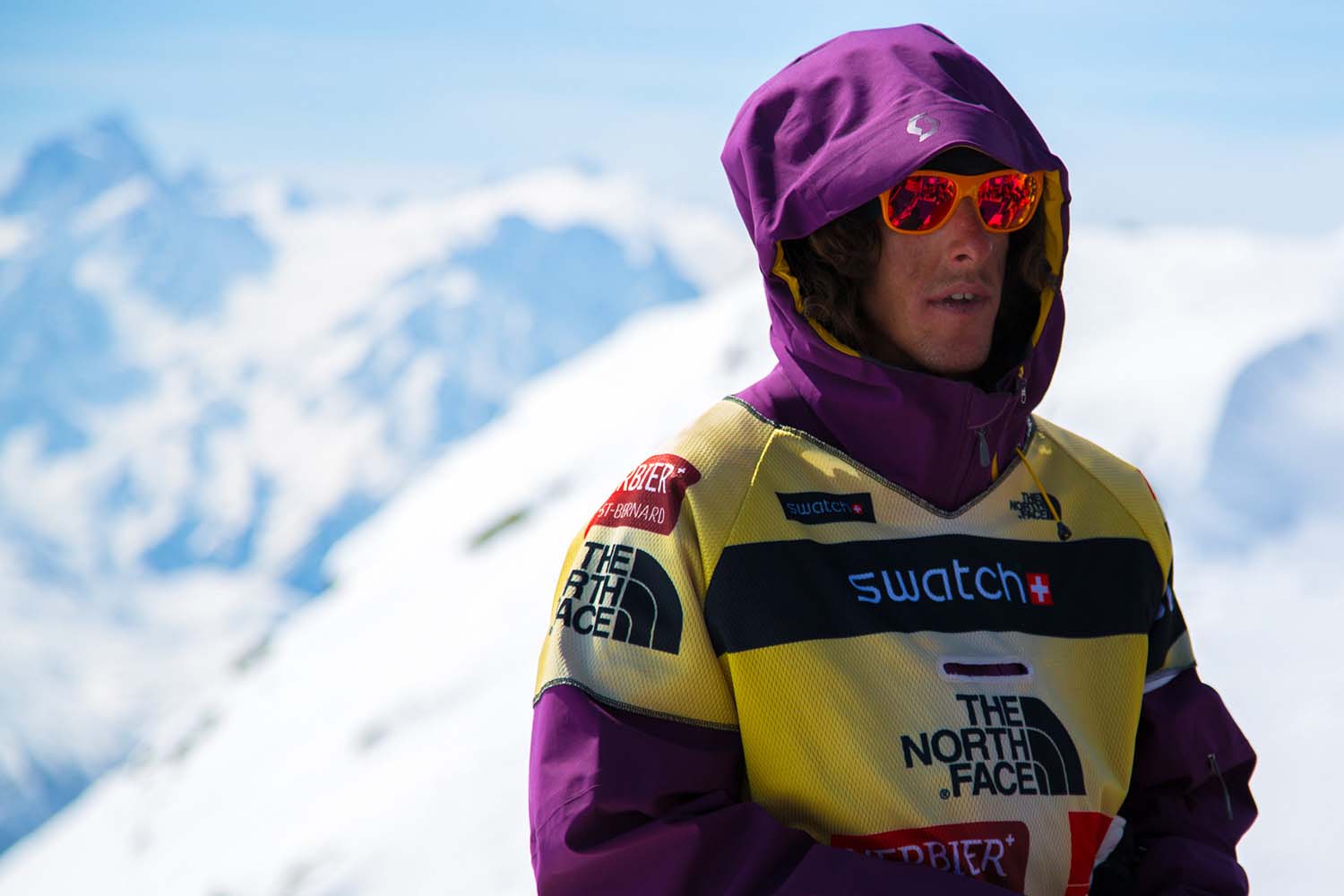 Loic Collomb-Patton is a La Clusaz native and a new comer to the tour in 2014.  He was picked early on as one to watch with two wins back to back in Italy and France.  Collomb-Patton brought his freestyle background and combined this with aggressive big mountain skiing to hold onto the golden bib throughout the season.  With the lions share of cowbells, flags, genepi and entire wheels of cheese, the La Clusaz fan club made their presence felt all across the resort.  Note to Team Kiwi for next year – we need more silver ferns, pavlova, duck callers and… DoBro’s? 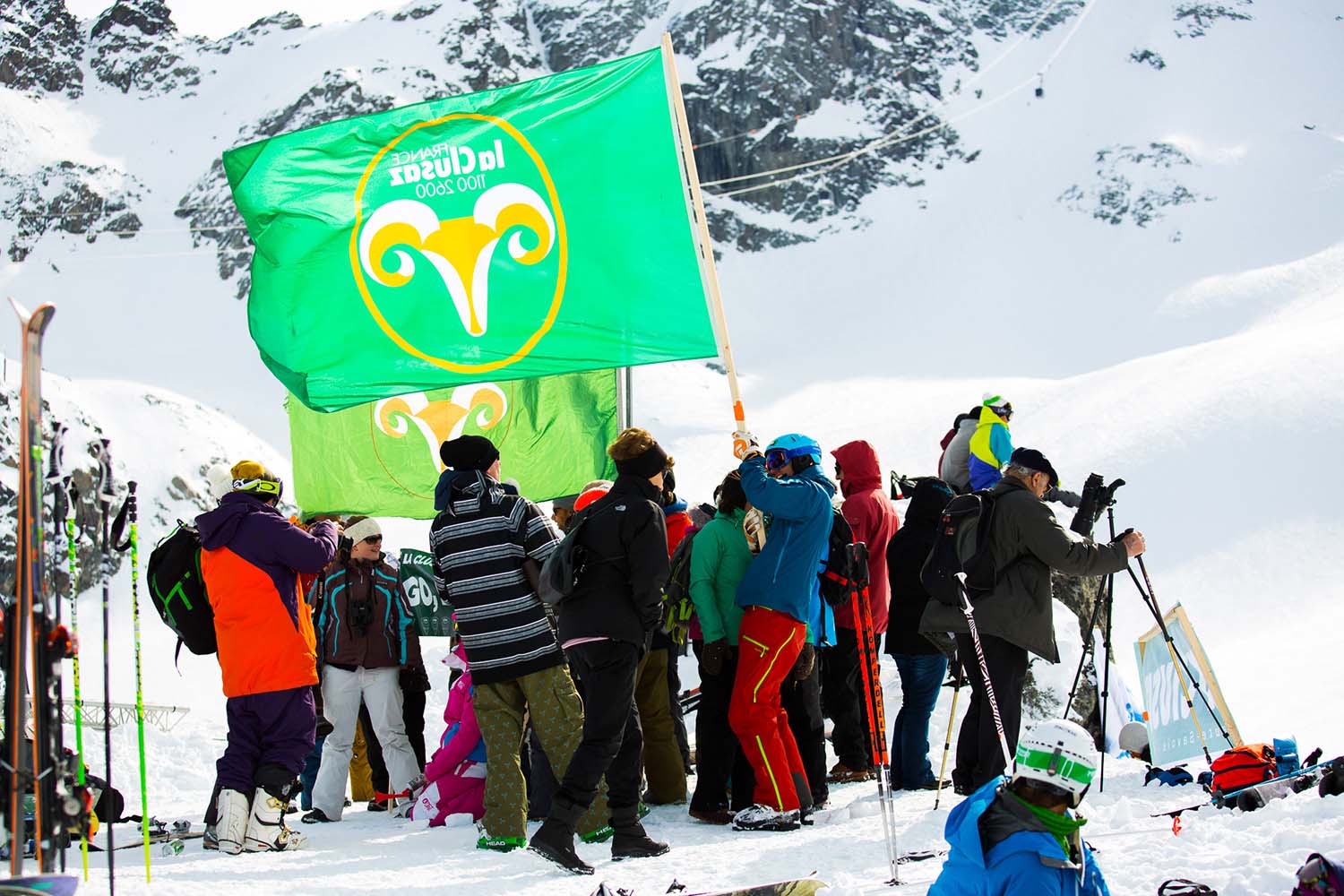 The winner on the day was Swedish FWT veteran Reine Barkered.  Having won the overall results by winning the Verbier Xtreme in 2012, Barkered could be excused for being less excited about the competition as he has already been there and done that.  But after absolutely crushing his run in traditional big mountain style, Barkered was yelling his head off in Svenska thanking the Nordic God of War and Thunder – Thor, Oden, Ragnarok and finally Ullr God of Skiing. 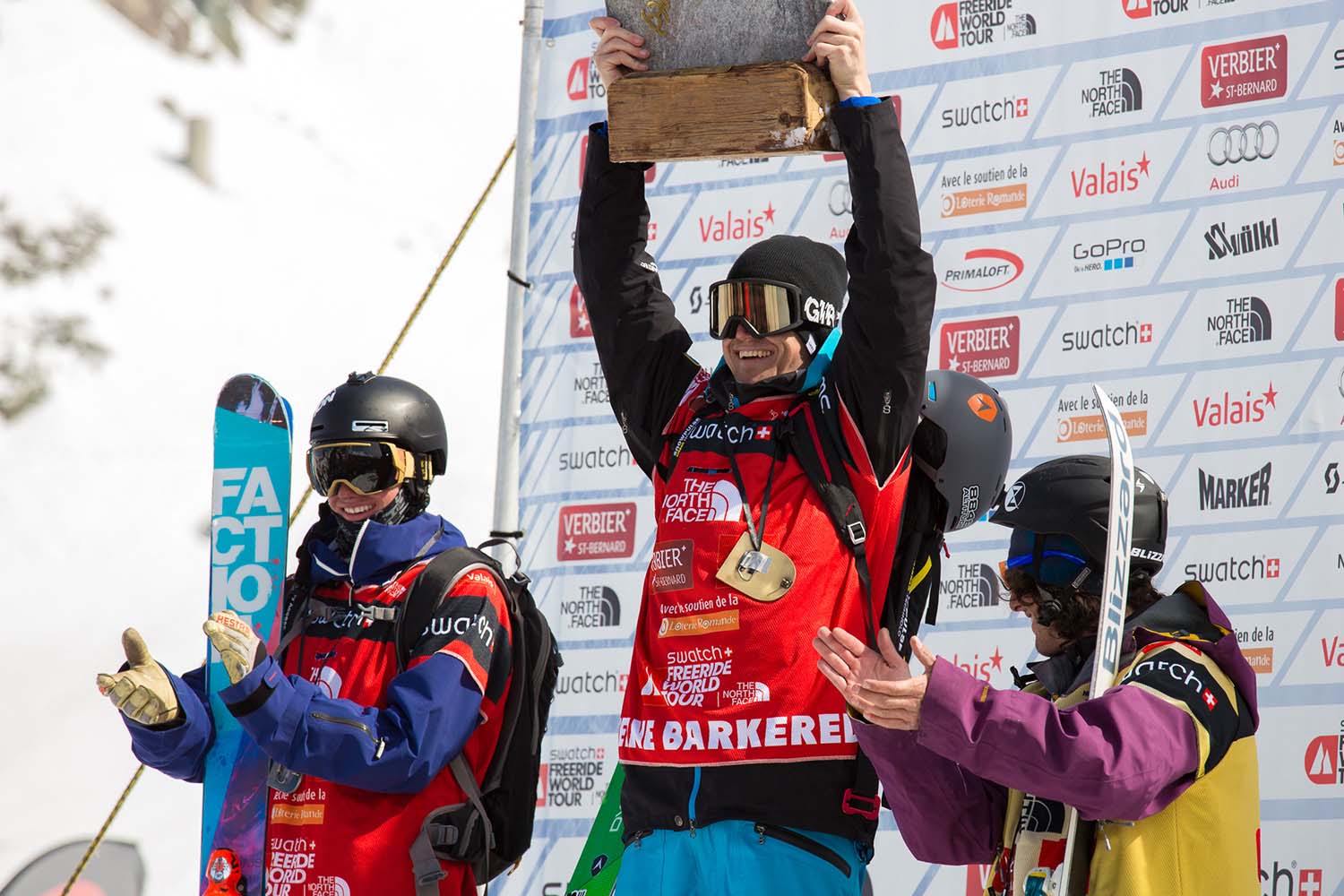 Reine’s aggression on the Bec is always hard to beat

The spread of the mens podium for the Verbier Xtreme is indicative that on the FWT, both the traditional big mountain skiers and the freestyle skiers can win on any given day.  The boundaries of what the athletes can withstand will be stretched, as will the progression of technical flips and spins.  The Freeride World Tour have made some controversial changes for next year’s schedule but politics aside, the skiing will no doubt continue to shock and amaze.